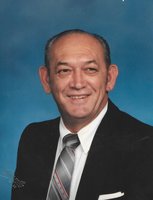 Edward Rehla passed away peacefully surrounded by his entire family Friday, September 22, 2017, after losing his battle with Alzheimer's disease. He was born November 28, 1930 in Louisville, Kentucky to the late Edward & Lucinda (Rehla) Dahl. Ed served in the United States Army, stationed in Germany, and married the love of his life Geraldine Prete upon his return. They enjoyed 65 loving years of marriage and four wonderful children. He was employed at J.M. Ney Company for 32 years as a tool & die maker. While Ed was an avid sportsman and member of the National Rifle Association, his entire life was solely dedicated to the devotion of his family. Some of Ed's greatest joys were the birth of his two grandchildren and three great-grandchildren. Ed was survived by his wife, Geraldine and their children, Debra (Rehla) FitzGerald and her husband John of Manchester, Edward Rehla of Windsor Locks, and Linda Rehla of East Windsor. His two grandchildren John FitzGerald and wife Nicole; Karen (FitzGerald) Barry and husband Jack. His three great-grandchildren; Gabriella FitzGerald, John (Sebby) FitzGerald & Ciara Barry. His sister-in-law Anne Ruggiero and many nieces and nephews who meant the world to him. He was predeceased by his loving son Michael; sister, Darlene Cooper; and Rose & Guy Latini (sister/brother-in-law). The family would like to thank The HomeAids, LLC for the wonderful care they provided to Ed over the last 18 months, specifically our two angels Bernetta & Novlett who helped our family through difficult times. Family and friends may call at the Tierney Funeral Home, 219 W. Center Street, Manchester Thursday, September 28, 2017 from 4-6:00 PM. Burial will be private at a later date. In lieu of flowers, donations may be made to the Alzheimer's Association, 200 Executive Blvd S, #4b, Southington, CT 06489 in Edward's honor.