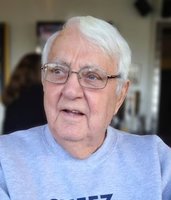 Robert L. Shea, age 98, passed away peacefully at his home in Manchester, CT on July 18.  Robert was born on November 21, 1921 in Hartford CT to Helen and Joseph Shea.  Bob was the last of eight siblings: Nick, Molly, Mary, Frank, Louie, Richie, Joe and Albert.  In 1941, six months before the attack on Pearl Harbor, Robert enlisted in the US Marine Corp.  He served in WW ll  and was called back to duty when the  Korean War started.  He was a proud Marine and a very proud American.  In 1943 he married Emily Catherine Ramino of Hartford.  Robert and Emily had two children…Bobby who married Beth Karns of Grand Rapids MI and Laurie who married Roger Troie of Windsor, CT.  Bobby & Beth had Ryan who married Carrie and they are the proud parents of Maddox 6 and Vivian 4.  And Colin who married Aimee and they are the proud parents of Corey 9 and Maya 7.  Laurie and Roger had Brian who married Julie and they are the proud parents of Danielle 5 and Ethan 1.  Kristin Troie is the last of Bob’s grandchildren.  He loved his 4 grandchildren and 6 great grandchildren more than words can describe.

After WW ll Bob went to work for Bond Bread.  When they dissolved Bob joined Wonder Bread where for many years he was one of their top salesman.  He was a gregarious guy who was always the life of the party.  A party was not complete unless Bob proposed a toast or made the final speech!!  Bob always stayed busy with projects around the house.  Bob and Emily were married for over 70 years.  Bob was a wonderful provider to his family who he loved and was very proud of.

In his later years he rooted hard for his beloved Yankees but thank God for Gino and the UConn girls basketball team.  He watched every televised game for the past ten years.  Tears will be shed for Bob but he was not cheated out of anything in life.  He worked hard, believed in God and abided by the laws of his country.  He was truly loved, respected and was  from the Greatest Generation!!.

There are no calling hours.  A Mass of Christian Burial will be celebrated on Thursday, July 23rd at 11:00 a.m. at the Church of the Assumption 29 Adams Street South, Manchester, followed by burial with military honors in Hillstown Veterans Cemetery, Manchester.