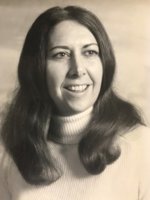 Sharon was born in Manchester, CT on July 19th, 1937, daughter of the late Edward and Irene Baldwin. Sharon is the widow of her beloved late husband Daniel J. O'Connell.

Sharon is survived by her daughter Sheryl Genovese and her husband Anthony Genovese of Westbrook, CT, and grandchildren Daniel and Benjamin.

She worked breifly at Pratt and Whitney, then dedicated 30+ years of work as a realtor for the Damato Enterprises.

Her favorite things to do will be remembered as the time she spent playing with her dogs, and laughing with her friends.

A graveside service will be held on Saturday, October 3rd at 11:00 a.m. at St. James Cemetery, 365 Broad St. Manchester.  The John F. Tierney Funeral Home, Manchester has care of the arrangements.