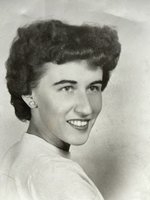 Geraldine LeClaire Lemelin, 90, of Manchester went to be with her Lord and Savior on February 15, 2021. Her journey began at home, surrounded by the familiar voices and loving hands of her devoted family. Geri was born June 26, 1930 in Massachusetts, to parents Henry and Jane Corcoran LeClaire. She graduated from Norton’s Wheaton College with a degree in History. She set out to Connecticut, and found her first job at Pratt and Whitney as a Research Center aide. She worked next to a young engineer named J Roger Lemelin, who eventually offered her an umbrella and stole her heart. They married in 1955 and bought their first house in Windsor Locks. After relocating to Manchester, Roger and Geri established roots in the community that have lasted 66 years.

Together, ROGERI raised five children, who were each given enough love to be convinced they were the favorite. This tender spirit multiplied when twelve grandchildren and three great grandchildren arrived. Each will carry a special spark of memory from their time together, and will collect new words for that next game of Scrabble. Geraldine will be remembered and missed by sons Jay (Joanne) Lemelin of Sinking Spring, PA; Jon (Tina) Lemelin of Niskayuna, NY; and daughters Jane (Terence) Ryan of Colchester, CT; Julie (Peter) Hess of St. Louis, MO and Joy (John) Henault of Vernon, CT; her grandchildren Jenna and Jacob Lemelin, Christopher, Sydney and Grace Lemelin, Julia and Joseph Ryan, Crystal Kelley, Nigel and Brittany Hess, and Garrett and Kelly O’Connor. Auria, Irelyn, and Orrin will always love their great grandmother Gigi. Geri was preceded by her beloved husband J Roger Lemelin in 1990 and her fiancé Donald C. Paine in 2018. She prayed faithfully for her parents and three siblings Marilou, Dicky, and Billy, and numerous close friends and family members.

Geri was active in many community organizations, and served as co-president of the Manchester Square Dance Club as well as board member of the Manchester Historical Society and the Manchester Land Conservation Trust. She was also involved with the Manchester Women’s Club, Manchester Memorial Hospital Auxiliary, and Mothers’ Circles at St. Francis and St. Gerard. As a loyal communicant of St James Church, she enjoyed an enduring relationship with friends made as a St James School parent and member of the Ladies of St James. It always seemed that wherever Geri went there would be someone she knew, which was a testament to her committed and generous nature. Geri loved travelling, theatre, art museums, music and books and passed those interests along to her children. She enjoyed Jeopardy and every kind of word game or puzzle, even inventing a new one just last month. She played bridge with several local groups and joined a group for breakfast on Fridays until last winter.

Calling hours will be on Saturday February 20, 2021 from 8:30-10:30 am at the John F. Tierney Funeral Home, 219 W. Center St., Manchester. A Mass of Christian burial will follow at 11:00 am, at St James Church on Main Street. Burial will be in St James Cemetery on Broad Street. Memorial contributions may be made to the Manchester Land Conservation Trust or St James, or an organization of your choice. The family would like to thank Companions Forever and Hartford HealthCare Hospice for helping her on her journey Home. For online condolences please visit www.tierneyfuneralhome.com