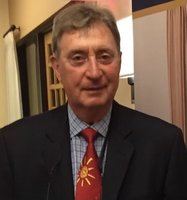 Don Gliha, 75, of Manchester, CT passed away on August 17, 2021 after a long and courageous battle with Parkinson’s Disease. Born in Hartford, CT on September 15, 1945 to Frank and Irene (Dupuis) Gliha, he was the proud owner and operator of the Connecticut Golf Academy in Manchester, CT for over 25 years. He touched the lives of so many over the years through his love of teaching golf and making the sport accessible to everyone.

Don graduated from Manchester High School in 1963 and went on to earn a degree in psychology from the University of Connecticut. At 24 years old, Don played golf for the first time which led to a lifetime of accomplishments that included election to the PGA of America on January 1, 1977 (45 years as an active member), Head Golf Professional at Black Hall Club in Old Lyme, CT from 1978 to 1984 and President of the CT Section PGA of America from 1984 to 1986. Don was one of only three PGA members in the Connecticut Section to achieve PGA Master Professional Status and was twice named the CT Section PGA Teacher of the Year in 1988 and 1998. Not only was Don a tremendous teacher, he could play and play well. In 2002, he won the CT Section PGA’s member qualifier and twice qualified to play in the Greater Hartford Open. In 2011, he was named the CT Section PGA’s Golf Professional of the Year, the section’s highest honor and was inducted into the CT Section PGA Professional Hall of Fame. Don was inducted into the Manchester Sports Hall of Fame in 2004.

Don’s ultimate gift was his love for others. He was a son, brother, partner, uncle, grandfather, and friend to so many. He leaves behind his loving partner of 22 years, Bobbi Torrison of Sarasota, FL, and her children Noel LaPlante (Brian) of Glastonbury, CT, Gretchen Torrison (Katie) of Thousand Oaks, CA and his grandchildren Ben and Katie LaPlante, Carlos Ritchie and Piper Torrison. Don also leaves behind his nieces Christine Rice of Jupiter, FL, and her daughter Tori Carriuolo, Kimberly and Sean Markham of Fairfield, CT and their children Madison, Cole and Chase. He is also survived by his sister Carol Grundman and her husband Charles of Jupiter, FL.

The family would like to thank the caring nurses and doctors who helped care for Don at Hartford Hospital in his last few days of life. A celebration of Don’s life will be held on Friday, August 20th at Manchester Country Club in Manchester, CT from 2-4pm. In lieu of flowers, memorial contributions can be made in his name to the Manchester Area Conference of Churches (MACC) or the Michael J. Fox Parkinson’s Foundation.