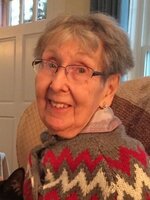 After graduating from Hartford High School in 1947 Joanne ended up assuming significant household responsibilities at a very young age when her father passed in 1948, and her mother was required to enter the workforce in order to support the family.  Over the years she and her mother travelled together often to visit her siblings as well as a trip to Italy where other family members resided. She was very much the family historian maintaining records and communication with relatives across the board. She lived with her mother taking excellent care of her until her passing in 1984.

Joanne entered the workforce in 1951 with the Travelers Insurance Company, her only employer, for just shy of 40 years before retiring in 1990.  At one point she managed approximately 50 people which was quite significant for a woman in that era of business.  Despite owning a car, she (and her mother) commuted daily on public bus transportation their entire working careers.

After retiring she volunteered at the main Hartford Public library and spent many days at the Newington Senior center while also assisting in many activities there. She was a regular communicant of St. Lawrence O’Toole Catholic church in Hartford for much of her adult years.

She was very much a fighter that enabled her to get to her advanced age, surviving an early life bout of cancer and later a stroke. As a single individual she was also very pragmatic, not ever wanting to be a burden to others by ensuring her personal matters were well attended to. A huge supporter of UConn Women’s basketball and a lifelong fan of the Boston Red Sox, after years of disappointment (and Yankee punishment from her brother), she was very happy to see the team become a winner!