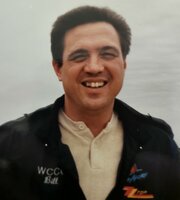 He was predeceased by his mother, Dorothy Piella Nosal, his father, William John Nosal and his step-mother, Meredith Estes Nosal. He is survived by his former spouse, Donna Nosal, of Tolland, their beloved daughters, Tuesday Elliott (Matthew) of Manchester, Robin Sharkis (Stephen) of Tolland, his grandchildren, who were his pride & joy, William and Rhiannon (Kevin “Walter”) Elliott of Manchester, Jamie (Amanda), Brendan and Caden Sharkis of Tolland, his sister, Susan Bertrand (Wayne) of Rocky Mount, NC, several nieces, nephews, extended family and friends.

Billy, or Papa as he was known by his grandchildren, had many jobs in his lifetime, but his true passion was music. He is probably best known for being Program Director and on-air personality at WCCC in the 1970s and 80s. He was also the sole-proprietor of The Advantage Group, advertising and public relations agency until his retirement.

He was an amazingly gifted musician who started writing and recording in his teens and had many popular songs on local Hartford radio in the 1960s. He also performed in many local bands and is lovingly remembered for performing at both of his daughters’ weddings.

A funeral Mass will be held Friday, October 7, 2022, St. Paul’s Church at 10:00AM, with a private burial to follow. A Celebration of Life will be held at a later date. For more information, please visit www.tierneyfuneralhome.com.