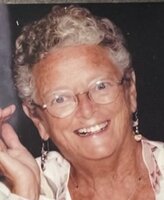 There was a little girl who had a little curl right in the middle of her forehead. When she was good she was very very good and when she was bad she was horrid. These are the type of little quips or poems our Mom would say. This obituary celebrates the life of 90 year old Mary E. Lynch Nicholas. Mary was born in Hartford 5/29/32 and raised by her mother Mary Brennan Lynch and father Thomas Joseph Lynch. She is predeceased by her husband Paul A. Nicholas Sr., brothers Timothy P. Lynch and Rev. Thomas J. Lynch as well as her son Andrew (Drew) J. Nicholas II.

The family would like to acknowledge the most beloved home health care provider Julie who was a godsend to the family and adored by Mary.

On July 6th, 1944, Mary was supposed to go to the circus with her cousins. They could not go so Mary went by herself. When she got into the ring she worked her way to the very top row. When the fire started climbing up the tent right behind Mary she thought it was special affects at first. By the time she realized it was a bad fire for real the exit was stampeded with people. Mom said the other exit area was where they brought the animals in so that was packed. So she went down the seats and into the ring walking across the ring and grabbed a small boy  (Johnny Wilson) who came from the Children’s Village just as clumps of molten paraffin were descending upon them. One lasting affect from the fire was that Mary always checked her exits whenever in a large area or building.

Her eldest brother Timothy who was a Navy man brought home a fellow sailor who Mary thought was very handsome with the most beautiful big brown eyes. Mary wed the love of her life Paul A. Nicholas on June 12, 1954.

Mary was a 1950 Graduate of Mount Saint Joseph Academy in West Hartford. Although she was awarded a full scholarship to Saint Joseph’s College she had to decline.and enter the work force to support her parents as her father was dying of cancer. Mary eventually after having four children went back to school and received two Master degrees beyond her bachelors.

In lieu of flowers the family requests that you make a contribution to the Drew Nicholas student fund which assists a student attend college who is positive, filled with laughter and always looks to the bright side of life. Checks should have Drew Nicholas in the notes and can be sent to Stephanie McKenna Wethersfield High School 411 Wolcott Hill Rd. Wethersfield CT 06109.