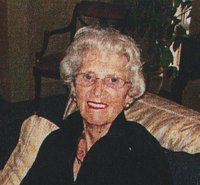 Irene A. Gliha, 94, of Manchester, beloved wife of the late Frank D. Gliha died Friday (September 13, 2013) at Manchester Manor. Born in Coiticook, Quebec, Canada, she was the daughter of the late Emil and Eleanor Dupuis. Irene was a salesperson at Youth Center in the Parkade for 20 years and worked with her son Don at Connecticut Golf Academy for 20 years. She was a communicant of the Church of the Assumption, was a volunteer at Manchester Memorial Hospital, and was a member of the Hillstown Grange for 65 years, having served as Master of the Grange during her tenure. She also spent 25 years wintering in Lake Worth, FL. She is survived by her son, Donald Gliha and Bobbi Torrison of Manchester; her daughter Carol Grundman (Chuck) of Bloomfield and Jupiter, FL; her grandchildren, Christine Rice and her husband, Kevin of Atlanta, GA, and Kimberly Markham and her husband, Sean of Fairfield; and her great-grandchildren, Tori Carriuolo, Madison Markham, Cole Markham, and Chase Markham. She is also survived by her dear friend Ilga Paups and numerous nieces and nephews. Besides her husband and parents, she was predeceased by her siblings, Armond Dupuis, Raymond Dupuis, Ann Dupuis, Theresa Lagasser, Beatrice Drouin, Anita Graskoski, and Loretta Gianfriddo. Irene's family would like to offer a special note of thanks to the staff of both The Arbors and Manchester Manor for their care. Funeral service will be held on Wednesday (September 18th) at 10:15 am from the John F. Tierney Funeral Home 219 West Center St. Manchester, with a Mass of Christian Burial at 11 am at the Church of the Assumption 27 Adams St. South, Manchester. Family and friends may call at the funeral home on Tuesday evening from 5:30-8:00 pm. Memorial donations may be made to the Manchester Manor Activity Fund 385 West Center St. Manchester, CT 06040 or to a charity of the donor's choice. For online condolences please visit www.tierneyfuneralhome.com.