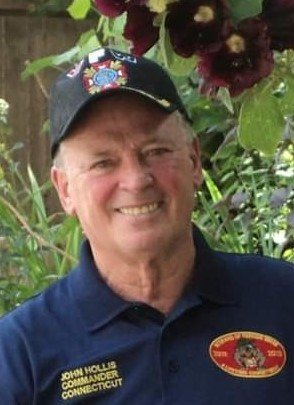 John Edward Hollis, 77, of East Hartford passed away peacefully at home surrounded by his loving family on the 4th of January 2019.  John leaves his wife and best friend Lori Jean Hollis.  He was born in Providence, RI and resided in Riverside, RI until moving to East Hartford, CT in 1954.  John proudly served in the US Navy aboard the USS Essex CVS-9 during the Cuban Missile Crisis.  He was awarded several National Defense Service Medals for his honorable service during his military career.  John retired from Hartford Distributors where he served as the Teamster President of Local 1035. He served his community and was on the East Hartford Board of Education and also served on board for the United Way. He also owned Cash Can redemption centers.  John was a lobbyist and helped to change many laws for the working man. John was honored to serve in many capacities for the Veterans of Foreign Wars, a life member of the VFW post 2083 achieving the role of 2012-2013 STATE COMMANDER Veterans of Foreign Wars Department of Connecticut.

John was a wonderful and caring dad to his children, John Jr., Frederick Hollis, Michael and his wife KC Hollis, Jessica and Latroy Dale, Kim and Mark Mcaninch, Bobbie and Pauline, and Jeffrey Caplinger.

He also leaves his beloved grandchildren, 1 ½ great-granddaughters, and many nieces and nephews. John loved his cigars and cigar buddies. His favorite past time was golf.

Besides his parents he was predeceased by his brothers, Frederick J. Hollis and Gerald C. Hollis. John will be sorely missed by his sisters Barbara and Ed Dettore, Debbie Rutledge, and Claire and Tom Rathbun.

Relatives and friends are invited to attend a Celebration of Life at the John F. Tierney Funeral Home, 219 W. Center Street, Manchester, CT  06040 on Thursday January, 10th from 5-8 p.m.  A Mass of Christian Burial will be celebrated on Friday January 11th at 11 a.m. at Our Lady of Peace, 370 May Road, East Hartford, CT 06118.  Immediately following the Mass, a graveside service with military honors for John will be held at Silver Lane Cemetery, 1280 Silver Lane, East Hartford, CT 06118. For online condolences, please visit www.tierneyfuneralhome.com.

To send flowers to the family or plant a tree in memory of John Hollis, please visit Tribute Store
Thursday
10
January