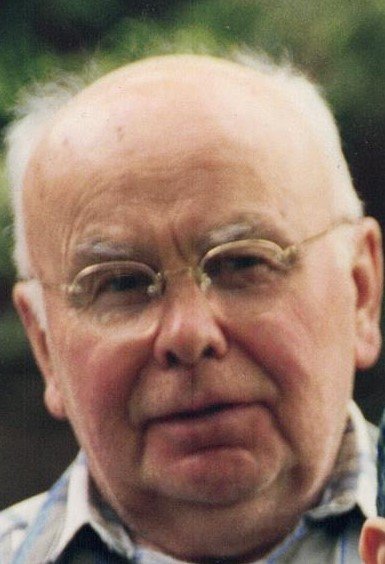 Joseph Waslo Busky, 99, of Manchester, died with his family by his side on February 3, 2019.  Husband of the late Catherine S. Busky, Joseph was born on August 28,1919 in Hartford, CT. He was the son of the late Michael and Teofila (Petronis) Busky and spent most of his childhood in Manchester, CT.  He attended Manchester High School, became certified as a Carpenter, and then worked at Hamilton Standard, East Hartford, CT while attending Teachers College in New Britain, CT. Joseph served in World War II as an Investigator in the Army Counter Intelligence Corps in Germany on the Russian border. Upon leaving his military service, he completed his degree, graduating from Teachers College in 1949. He began his masters at Columbia University, New York, NY and completed his degree at Hillyer College, Hartford, CT. Joseph taught at Mansfield Training School, East Windsor High School and Manchester High School.  He retired from Manchester High School in 1986 after teaching Industrial Arts for 29 years.

Joseph married Catherine in 1956 and had six children. He put his family first and was known for his commitment, honesty, integrity and wry sense of humor. He was a man of deep faith and a devoted member of Saint Bridget’s Church in Manchester.

Joseph loved carpentry and built several well-crafted homes along with many custom furniture pieces for his family. He was a long time fan of Notre Dame football, the Red Sox and the Giants. Joseph dearly loved his grandchildren, faithfully attending their birthdays and activities for years.

He is survived by his six children – son Ted Busky of Storrs (his wife Jeannette Picard and their children Nathaniel and Jillian Picard-Busky), daughter Mary Busky of South Windsor (her husband Jack Ceppetelli and children Joseph and Alana Ceppetelli), daughter Elizabeth Busky of Boston (her partner Lois Ebel), daughter Rosemary Busky of Brookfield, IL (her husband Carl Habercoss, his children Kristyn and Josef), daughter Margaret Eisenhauer of Putnam Station, NY (late husband Steven and her son Luke) and son George Busky of Ellington (his wife Karen and their children Julia, Erin, Amanda and Nicholas Busky). He is also survived by several great grandchildren and many nieces and nephews. Joseph was predeceased by his sister Ann, brothers Albert and Charles.

The family will receive guests on Wednesday, February 6 from 4 – 7 PM at John F. Tierney Funeral Home, 219 West Center Street, Manchester.  The Funeral Liturgy will be celebrated at 10:00 AM on Thursday, February 7 at Saint Teresa of Calcutta/Saint Bridget Church, 80 Main Street, Manchester.  Burial will follow at Saint Bridget Cemetery, 195 Oakland Street, Manchester. In lieu of flowers, memorial remembrances may be made in Joseph’s name to the Parish of Saint Teresa of Calcutta (www. manchestercatholic.org). For online condolences, please visit www.tierneyfuneralhome.com.

Share Your Memory of
Joseph
Upload Your Memory View All Memories
Be the first to upload a memory!
Share A Memory
Send Flowers