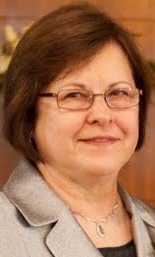 Carolyn Diann McEvitt, 73, of Farmington, CT passed away on Wednesday, July 24, 2019. She was born to the late Charles Ewanco and Marie Ewanco Faszcewski on February 16,1946 and raised in McKees Rocks, PA.

Carolyn Diann Ewanco married S. Lamont McEvitt on September 9, 1967 in Pittsburgh, PA where they met as college students and lived until moving to Farmington, Connecticut in 1973. They were married for 51 years.

Carolyn and her family were active members of St. Patrick Roman Catholic Church in Farmington, CT where Carolyn volunteered teaching religious education as well as was a member of the Women’s Guild.

Carolyn was an excellent mother and wife who never gave up her determination to have children and support her family emotionally and financially. Carolyn experienced four difficult pregnancies which resulted in two daughters.  She spent tireless hours making sure her two daughters were well taken care of between supporting them through academic education, religious education, and athletic endeavors as competitive gymnasts. At the age of 40, Carolyn returned to college working nights and weekends to complete her Bachelor of Science Degree in Accounting at St. Joseph College in West Hartford, CT. Upon graduation she worked as an accountant and bookkeeper up until suffering a stroke in January 2018.  Carolyn was an artist taught by her father at a young age.  Her talent complemented her husband’s love of collecting art and antiques which she also began collecting herself.  As an animal lover, Carolyn spent many years rehabilitating animals in need.  Later in life she rescued cats and a golden retriever named, Bailey.  Carolyn worked with Bailey to become a trained therapy animal handler and together they became certified in 2013.

Carolyn was predeceased by her two sons: Ian and Ethan McEvitt. She was also predeceased by her twin brother Dennis Ewanco as well as her brother James Ewanco. Carolyn is survived by her siblings: Thomas Ewanco and Jeannette “Dee” Rush (twin of James). She is also survived by her husband, Lamont McEvitt, daughter, Meghan McEvitt and her fiance, Michael Boyle, and daughter Kate Heller and her husband Aaron Heller. She is also survived by two granddaughters, Addison Heller and Peyton Heller.

Her daughter, Meghan McEvitt lovingly cared for her the last 1.5 years of her life following her stroke. Meghan’s sister and brother-in-law, Kate & Aaron Heller also aided with her estate needs as time and distance allowed while residing in Missouri until Bill Mastogiovanni stepped in as Conservator of the Estate to help provide the proper support needed for the family. Lamont, Meghan, Kate, and Aaron would like to express their deep gratitude for any family, friends, co-workers, and staff at the hospitals and the nursing home including visiting hospice caregivers who offered prayers, time, care, and emotional support during these difficult times. In lieu of any flowers, Carolyn would like you to donate to PetPartners.org.

A funeral service celebrating her life will be held on Friday, August 2, 2019, at 10:00 AM at St. James Roman Catholic Church 896 Main St., Manchester, CT 06040 followed by a procession to St. James Cemetery. The John F. Tierney Funeral Home, Manchester has care of the arrangements. For online condolences, please visit www.tierneyfuneralhome.com

To send flowers to the family or plant a tree in memory of Carolyn McEvitt, please visit Tribute Store
Friday
2
August

Share Your Memory of
Carolyn
Upload Your Memory View All Memories
Be the first to upload a memory!
Share A Memory
Send Flowers