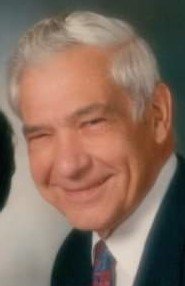 Raymond J. Dumas passed away on October 24, 2019 at home with his family at his side. He was the beloved husband and best friend of his wife Helen (Pisch) Dumas for 68 years. He was born in Manchester the son of the late Alexander & Anna (Ganseman) Dumas. He lived in Manchester for most of his life. He attended local schools and graduated from Manchester High School. Ray Joined the United States Navy when he was 17 years old. He served aboard the USS James E. Craig 201 in the South Pacific During World War II. He was employed at the CT State Police and at IBM from which he retired after 37 years. He was a longtime member of the VFW and the Army and Navy Club.  Ray is predeceased by his sister Alice Coburn and his brothers Harold Dumas and Billy Dumas.

Special thanks to his aides, especially Michelle Nicholson, Jenny Werner and Alfred Donkor who are like family, and the Hospice program for the wonderful care received which made it so Ray could stay at home. Special thanks to Dr’s Angelee and Tris Carta, Walter & Debbie Dumas, nieces Janet Pisch, Linda Weintraub, Joan Kasevich, great nieces LuAnn O’Regan & Amy Chester, friends and special neighbors Fred and Robin Frost, Mary Ann Thibodeau and Leslie Backbom and to all others who helped in different ways, Thank You!

Family and friends may call at the John F. Tierney Funeral Home, 219 West Center St., Manchester on Wednesday October 30th from 4-7pm. A Mass of Christian Burial will be celebrated at 10am on Thursday at St. James Church, 896 Main St., Manchester with Rev. John Melnick as Celebrant. Family and friends are asked to meet directly at church. Burial with full military honors, will follow in St. James Cemetery, 328 Broad St. Manchester. Those wishing to make memorial donations can be to the charity of the donor’s choice.

Share Your Memory of
Raymond
Upload Your Memory View All Memories
Be the first to upload a memory!
Share A Memory
Plant a Tree