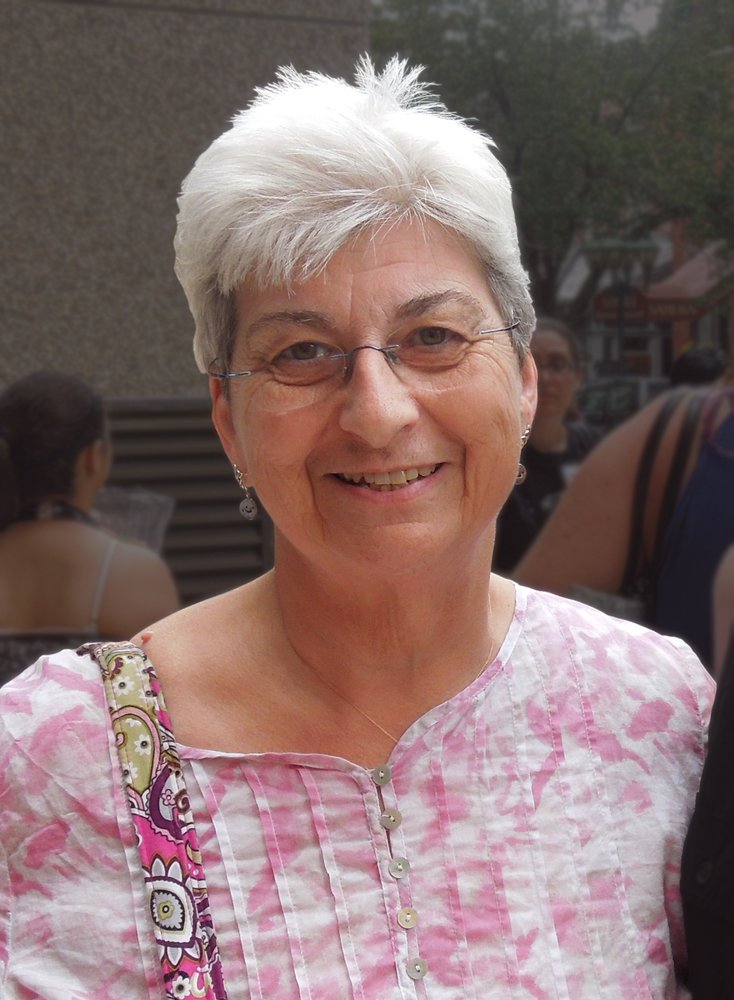 As a child, Gail was a competition level classical pianist. Her love of all music was a constant throughout her life; a protection against the sorrows she experienced, including  the tragic and early loss of her mother at the age of 10; which left her beholden to the sadness of her father at the loss of his wife. Music also uplifted the countervailing joys and was an early bond with her then suitor, and later husband, John.

John and Gail were introduced to one another by her sister Jackie’s husband, Sid. Ten years older, John was an introverted, bookish journalist at the Worcester Telegram and Gazette. They were married in West Boylston, MA on October 8, 1960.

Gail went to High School at Malden Girls Catholic, deciding at that young age to convert to Catholicism; a betrayal to the Congregationalism of her mother and mother’s sisters; but a source of hope to her. She knew her own mind at an early age. She took up a nursing career, graduating with her nursing degree from the Malden Hospital School of Nursing, now the Endicott College School of Nursing. Shortly after completing her nursing degree, she met and married John. As an adult, she returned to school, taking courses at Manchester Community College, leading to her Associate’s degree and later transferring to the University of Connecticut, where she received her Bachelor’s degree in General Studies. She graduated from college in 1985, the same year as her eldest son, Adam.

Soon after their marriage, John and Gail moved to the Frog’s Hollow neighborhood in Hartford. John had taken a job at the Hartford Courant; and Gail began her nursing career as a night nurse at Hartford Hospital, which she would walk to from their apartment. Soon after the arrival of their first child, Anastasia; they moved to the “little” cape at 32 Ferncrest Drive in East Hartford. A little over a year after the arrival of Stasia, their second child, Adam was born. Four years later, Rachael was born and in 1970, Julian arrived. The little house was full and lively.

While raising their children, Gail eventually returned to her nursing career at Manchester Memorial Hospital. She always volunteered for the shifts during Christmas season so that her nursing colleagues, who were single mothers, could spend the holiday season with their families. She became a charge nurse and later an IV nurse. She even completed and was certified as an EMT. She soon found her calling in Oncology, becoming a certified oncology nurse, working in the homecare department at the hospital, full time until her retirement. Her service to patients and families went beyond the bounds. She was named Nurse of year by the local American Cancer Society and honored by the hospital, as well for her work. Later, as a Eucharistic Minister, she would visit homebound parishioners and inevitably bring her nursing skills to this mission. As a Homecare nurse, she not only helped manage the cancer care for patients, she worked closely with family members to help them prepare for the vicissitudes of loss.

John and Gail were also swept up in the progressive movements of their day. As committed Catholics they welcomed the opening of the Catholic Church during Vatican II, and were involved in anti-war, women’s rights, and civil rights movements. During the AIDS crisis, she and her nursing colleague Connie Callaghan started a support group for parents of children with HIV and she became a “buddy” to a young man dying of AIDS. During the fight for marriage equality, both she and John took up the cause, advocating for passage of legislation in Connecticut. As a volunteer with the Women’s League of Voters, Gail was given a mimeograph machine to print out flyers. As adults, her children loved to tease her printing of manifestos in the basement; secretly admiring and noting her commitment to justice and voting rights. She was forthright and vocal to everyone on matters of social justice; often to the mix of embarrassment and pride of her children observing her explain to the young grocery clerk, with her Boston accent that never faded, why ShopRite should only sell grapes from the Farmworkers movement led by Cesear Chavez, for example.

To speak only of her activism is of course, is not to lessen the other aspects of Gail. She could laugh; she loved jokes and oftentimes, she would laugh so hard at a story, she would start to cry. Uncle Sid’s storytelling during Thanksgiving dinner, was always an occasion for these moments of great laughter. These too are the memories we hold dearly of her.

Her love of Vermont is perhaps most important to our family, specifically the Northeast Kingdom and the village of Island Pond. As a child, after her mother died, Gail was put on a train at South Station in Boston and taken to St. Johnsbury, VT. There one of her many aunts and uncles would pick her up and her summer would begin. She would spend time on Aunt Ivah and Uncle Errol’s farm in Island Pond. She would play with cousins Paul and Martha.

She passed her love of Vermont onto her children. Every summer, for two weeks in August, we would load up the car; eating sandwiches she prepared and drinking from concoction, she called “bug juice,” prepared from leftover ginger ale, orange juice, and fruit juice; that might go sour if left in the refrigerator during our vacation. Nothing to this day tastes like bug juice, which we eagerly devoured in small dixie cups. She shared the delights of Vermont cooking - Aunt Ivah’s recipe for apple pie and pumpkin pie; angels on horseback known to others as s’mores, and the depression era meal of salmon wiggle (canned salmon, canned mushroom soup, and canned peas); mixed up and served on four saltines. She was a self-taught baker - breads, pies, and cookies. Everything cooked from scratch, boxed recipes an offense.

She passed onto her children and grandchildren a love of music, literature, and art, together with a passion for movies, her love for chocolate and potato chips, and her love of cats and dogs. She later became an avid gardener. She also learned to knit and when she retired, knitted prayer shawls with a church group. Her activism has been passed along - now evident in her grandchildren, especially Hannah and Rachael who are participating in Black Lives Matter protests. Her career in nursing inspired Meaghan, just beginning her career as a registered nurse; her love of gardening and cooking to Matt.

Gail had many close, lifelong friends. Her fellow nurses at Manchester Memorial Hospital supported one another in good and bad times. Her friend Barbara Abbott of Rochester, NY. They forged a friendship during the two-week vacations on Seymour Lake in Vermont, sustaining it over the years with letters, phone calls and visits. Marlis Gage, a neighbor in East Hartford would visit for cups of tea and to work on basket weaving.

Gail is survived by her four children. Anastasia Barrett Edmonston and her husband Mark of Baltimore, MD; Adam John Barrett and his wife Janette of Guilford; Rachael Barrett and her husband Patrick Hayes of Philadelphia, PA; and a son Julian Anthony Barrett of Barnesville, GA; and four grandchildren, Hannah and Rachael Edmonston, and Meaghan and Matthew Barrett.

The family would like to thank the nurses and staff of Gladview Health Care Center for their dedicated and compassionate care for Gail during her illness.

Relatives and friends are invited on Monday, June 15th at 10am for a period of Visitation prior to the 11 am Mass of Christian Burial celebrated at the St. Christopher Church of St. Edmund Campion Parish, 538 Brewer St., East Hartford, followed by burial in Silver Lane Cemetery. In lieu of flowers, memorial contributions can be made in Gail’s memory to American Cancer Society www.cancer.org

To send flowers to the family or plant a tree in memory of Gail Barrett, please visit Tribute Store
Monday
15
June

Share Your Memory of
Gail
Upload Your Memory View All Memories
Be the first to upload a memory!
Share A Memory
Send Flowers