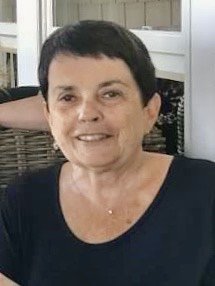 Patricia Barrett Brannick, 69, of Westerly, RI, beloved wife of David J. Brannick, passed away on Friday, September 4, 2020 at Yale New Haven Lawrence and Memorial Hospital, New London, CT.  Born in Hartford, she was the daughter of the late Donald J. and Janet (Delmore) Barrett and was a longtime resident of Manchester.

In addition to her loving husband with whom she shared over 50 happy years, she is survived by her children Libby (Brannick) Daly and her husband Ted of Colchester; Sean D. Brannick of Manchester, and her grandchildren Hunter and Emmett; her siblings Nancy Barrett, Elizabeth Vichi and her husband John, and Donald J. Barrett, Jr. and his wife Audrey. She is also survived by her uncle Peter Barrett and his wife Sandy, her aunt Barbara Barrett; her brothers and sisters-in-law Marc and Pam Brannick, Loy and Jon French, and Carol Baker; and many cousins, nieces, nephews and friends, all of whom she held very dear to her heart.

Pat was pre-deceased by her brother, Anthony (Tony) Barrett, her stepmother, Elaine Barrett, and her brother-in-law Bob Brannick.

Pat was an old soul and in her quiet way she made a positive and memorable impact on the lives of those around her. If you knew Pat, your life was all the better for it. She was dedicated to her family. Throughout much of her life, Pat volunteered her efforts to helping others through school, church, and the Manchester community. She was particularly proud of her many years volunteering with MACC.

Pat graduated from Manchester High School in 1969 and earned a Bachelor's Degree in Psychology from the University of St. Joseph in West Hartford, CT in 1973. In her early adult life, Pat was a stay-at-home mother until she returned to the workforce where she had over a thirty-year career in the insurance industry working as a computer programmer, systems analyst, and business analyst. She eventually became a manager and was well-respected by colleagues and friends in her field. She and David enjoyed their later years by the beach in Westerly, RI and were regular parishioners of St. Clare Church.

Pat’s family would like to thank the staff at Yale New Haven Westerly and Lawrence and Memorial Hospitals, as well as the Hospital for Special Care in New Britain including Dr. Whitaker, Honora, and Kristina who provided outstanding care and support.

A Mass of Christian Burial will be celebrated on Friday September 11 at 10 a.m. at St. James Church 896 Main Street, Manchester followed by burial service in St. James Cemetery.  The Mass will be livestreamed via the John F. Tierney Funeral Home Facebook page.  For online condolences and a link to the stream please visit www.tierneyfuneralhome.com.  A celebration of Pat’s life will be planned for a later date.

In lieu of flowers, donations in Pat’s honor can be sent to the Sean M. Healey and AMG Center for ALS at Mass General https://giving.massgeneral.org/donate/medical-research/ and the Tony Barrett Memorial Manchester Scholarship Fund http://www.manchesterscholarship.org/index.cfm/donations/.

To send flowers to the family or plant a tree in memory of Patricia Brannick, please visit Tribute Store
Friday
11
September

Share Your Memory of
Patricia
Upload Your Memory View All Memories
Be the first to upload a memory!
Share A Memory
Send Flowers