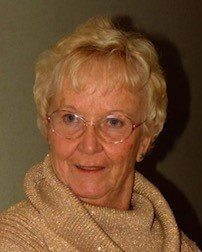 Rita (Martin) Kalos, 90, of Manchester, passed away peacefully on January 29, 2021. Rita is survived by her beloved husband of 69 years, Peter Kalos, who was absolutely devoted to her and was her incredible caretaker over the last few years. She also leaves behind her cherished children, Ken Kalos and wife Kathy of Vernon, Donna Hickey and husband Terry of Coventry and Stephen Kalos and wife Nancy of Unionville. Rita was “Grandma” to Shonna Kalos, Michelle Kelly, Jen Hickey, Jordan Hickey, Jessie Kalos and Joe Kalos; they loved her very much. She was also “Gigi” to Jianna Cratty, Brayden Hickey and Addison Hickey.  Rita also had many nieces and nephews who she loved dearly, some of whom were close to her own age!

Rita came from a big family and was predeceased by her parents, Charles and Margaret (Collins) Martin and her siblings, Charles, Albert, Kathryn, William,  Joseph,  Jeanette, Mildred, Margaret and Doris. When Rita's mother died when she was seven, she was raised by her father and sisters.  Throughout their lives, the sisters’ constant laughter could be heard whenever they were together!

Rita’s favorite day of the year was Thanksgiving and she welcomed many friends to her home to watch the Thanksgiving Road Race, eat and drink goodies, dance to music and watch her be serenaded by “The Plaiders”.  She was an avid fan of the Boston Red Sox, the UConn Huskies basketball teams, and her husband Pete's singing. She could often be found at karaoke, listening in awe of Pete's beautiful voice while he dedicated many songs to her. She and Pete spent winters at their home in Clearwater, FL and the family enjoyed visiting often.

We will all miss her zest for life, sense of humor, and kind and caring ways. We love and miss you Rita, Mom, Grandma and Gigi. Until we meet again.

And now the purple dusk of twilight time

Steals across the meadows of my heart

High up in the sky the little stars climb

Always reminding me that we’re apart

A celebration of life will be held at a later date when it’s safe to gather. Donations can be made in Rita’s name to the Breast Cancer Research Foundation: www.bcrf.org.

Share Your Memory of
Rita
Upload Your Memory View All Memories
Be the first to upload a memory!
Share A Memory
Plant a Tree