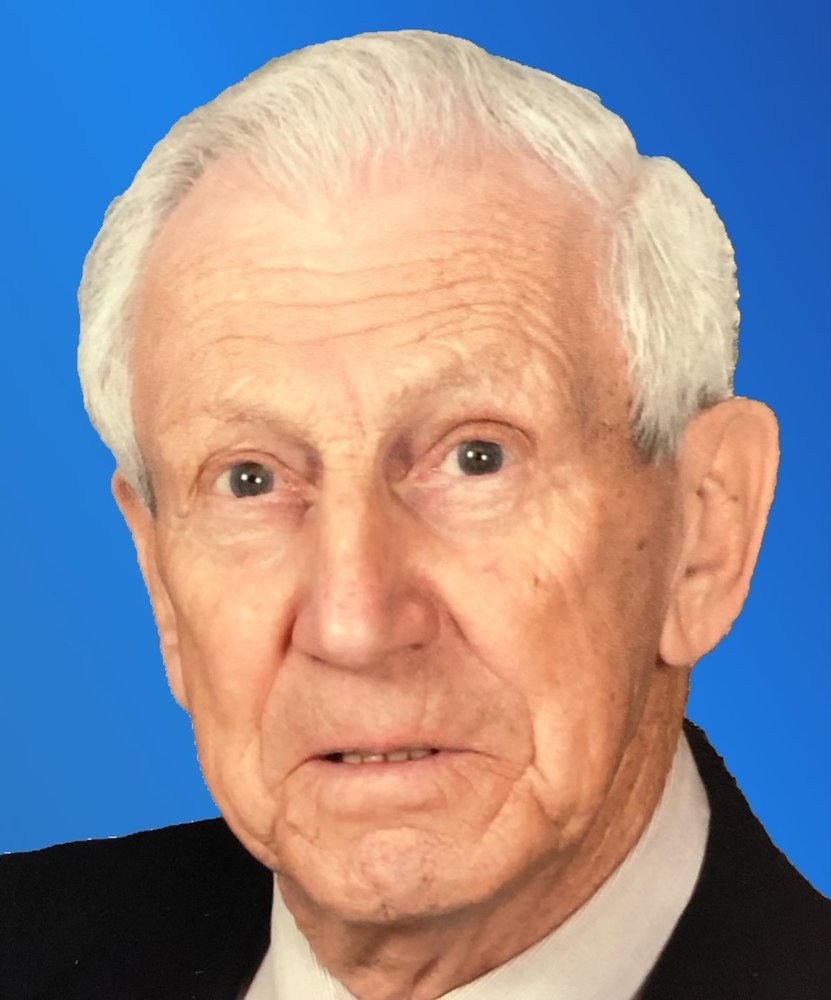 Joseph “Roland” Daigle passed away peacefully on Thursday, June 24, 2021 at home surrounded by his family. He was the beloved husband for 65 years of the late Anita Pelletier Daigle. He was born on December 3, 1925 in Lille, Maine to the late Pea Daigle and Jeannette Collins Daigle. Roland retired as a foreman from Pratt & Whitney Aircraft in 1983, where he worked for over 30 years. He served in the US Army during World War II and was a member of the Army & Navy Club and the Knights of Columbus. Roland had a variety of self-taught skills and used those to build and repair anything having to do with his house and cars. He loved gardening and had vegetable gardens every summer. A tomato wasn’t a good tomato unless it came from a home-grown garden he’d say. Roland loved to play cards with his buddies at the Army & Navy Club on Friday nights and socializing with the guys at “The Garage” on Friday afternoons. He enjoyed playing train, fast track and making puzzles with family. After retirement he took up golf and played with or without a partner, often hooking up with someone on the course or just playing a round on his own. He just enjoyed playing and played his last round in October at the age of 94. He was a member of a Monday night bowling league in Vernon for years until the age of 93. Roland had a passion for travelling and throughout his marriage, Roland and Anita traveled all over the U.S., Canada, the Caribbean and Europe and then he travelled with his daughters. His most beloved place every year was going back home to northern Maine to visit family where he shared so many special times and loved the parties! He never went to a party he didn’t enjoy!

Roland is survived by 6 daughters and their spouses, Rella Rice and John of Chelsea, VT, Janine Rizza and Don Bourgoin, Janet Lessard and James, Karen McNamara and Tim, and Nancy Daigle all of Manchester and Elaine Dabrowski and Michael of Bolton. He is also survived by 3 grandchildren and their spouses, Tina Arpin and Neil of Amston, Angela Chapman and Jason of South Windsor, and Steven Rizza of Manchester and one very special great granddaughter, Hailey Chapman. Roland also leaves a very special niece and nephew who were like his children, Maryann and Edmond Parent and special neighbors, Tom and Jan Fiengo. Tom went above and beyond to help Dad in many ways. We can’t thank you enough for all you did for Dad.

Roland is also survived by 2 sisters, Maria Blanche Albert of Manchester and Muriel Roy of St. Agatha, Me. He leaves many brothers and sisters in-law, nieces, nephews and friends. Besides his wife and parents, he was predeceased by his stepfather Joseph Tardif, a sister Yvette Holmes, brothers Guy Daigle, Patrick Daigle and Raymond Daigle and a son-in-law Frank Rizza. He will truly be missed by all who knew and loved him.

Special thanks to his hospice nurse Donna Lauzon and the aides from VNA who helped with Dad’s care the last few months as well as Nii and Sylvia from A Caring Hand.

Due to covid concerns, the family requests that masks be worn at the funeral home. Calling hours will be on Tuesday, June 29, 2021 from 8:30 – 10:30 at the John F Tierney Funeral Home, 219 West Center Street, Manchester, CT followed by a Mass of Christian Burial at the Church of the Assumption, 29 S. Adams Street, Manchester at 11:00 am. Burial will follow at St. James Cemetery, Manchester. In lieu of flowers, donations may be made in his memory to the Army & Navy Club, 1090 Main Street, Manchester, CT 06040.

To send flowers to the family or plant a tree in memory of Roland Daigle, please visit Tribute Store
Tuesday
29
June

Share Your Memory of
Roland
Upload Your Memory View All Memories
Be the first to upload a memory!
Share A Memory
Send Flowers