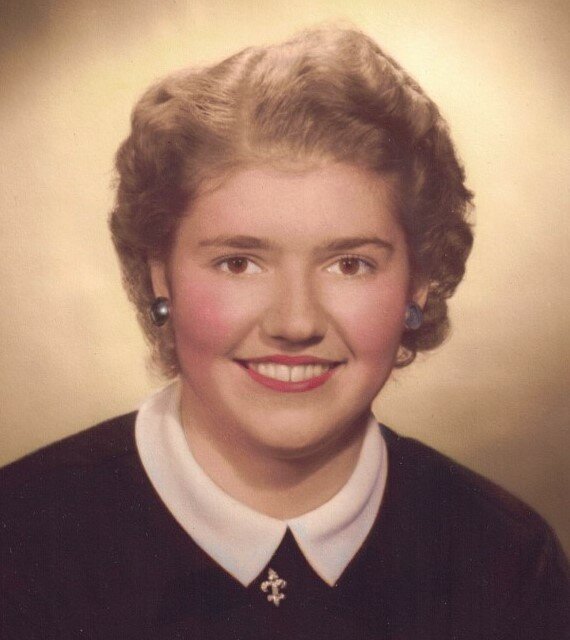 Shirley P. Cowles, aged 86, passed away suddenly at her home in Manchester on Wednesday, September 29th, 2021. She was born in Manchester, Ct. on April 6th, 1935 to Dexter L. and Mary (Riester) Peterson, both predeceased. She graduated from Manchester High School in 1953. Through her brother Clifford, she met his best friend Harry H. Cowles Jr. The two were married on June 29, 1956 at Emanuel Lutheran Church in Manchester. They were married for 56 years. She helped the family income working as a bagger at Mott’s, a local grocery store, a teller at Hartford National Bank, and for many years delivered the interdepartmental mail at Manchester Memorial Hospital. She was fond of gardening and their yard was brightened by several floral beds as well as a vegetable garden. Shirley was creative. She made Christmas wreaths from “gumball” tree seed pods and evergreens and took evening classes learning skills such as decoupage, and 3-D paper cutting art. The family’s favorite class that she took though was cake decorating because the “homework” included a new cake every week which would be brought home and then need to be consumed! She was also a wonderful cook who made pepper relish from their own peppers, went picking strawberries for cooked jam and grapes for jelly. Her kitchen smelled heavenly when those jams and jellies were being made. She also baked a huge array of cookies for Christmas each year, making sure that everyone had their favorites. It just wouldn’t be Christmas without those cookies! One thing she will be remembered for is her baked macaroni and cheese. Made with long spaghetti instead of elbows, and the longest aged cheddar you can get, family lore states that it must be baked in a large yellow Pyrex bowl or “it won’t taste right”. It was, and still is, a family favorite and frequently requested. The dish was taught (for it has never been a written down recipe), to her children and they have taught it to their children. It has been taken to potlucks and other dinners, with frequent requests for “the recipe”! No one knows when it was first made with long spaghetti (likely sometime when her own mother or grandmother had run out of elbows), but now, after all these years, it would be akin to sacrilege to make it with anything but long pasta… oh yes, and you must remember the large Pyrex yellow bowl! Each of her children have one and they have made sure that each of their children has one as well so that they can each produce the PERFECT macaroni and cheese, just as Grammie would have done! Sadly her brother, Clifford A Peterson, predeceased her by exactly one month on August 29, 2021 in Port St. Lucie, Fl. She is survived by two children and their spouses, Debra (Cowles) and Lyndon C. VanWagner of Rochester, N.Y., and Douglas Michael and Ruth (Russell) Cowles of Manchester, Ct.; five grandchildren, Emily Rose (VanWagner) Christman of Rochester, N.Y., Douglas Michael Cowles II of Rocky Hill, Ct., Jennifer Lynn (Cowles) Waldburger of Bloomfield, Ct., and Gregory Andrew Cowles of Danielson, Ct.; two great-grandchildren, Julian Jeffrey Christman and Veronica Rose Christman both of Rochester, N.Y.; and a sister-in-law, Nancy (Cowles) Clerke of Ocala, Florida. Private interment at a later date in the family plot at East Cemetery, Manchester, Ct. Shirley would be pleased to be remembered by Donations to the Salvation Army.

To send flowers to the family or plant a tree in memory of Shirley Cowles, please visit Tribute Store

A Memorial Tree was planted for Shirley
We are deeply sorry for your loss ~ the staff at John F Tierney Funeral Home
Join in honoring their life - plant a memorial tree
Services for Shirley Cowles
There are no events scheduled. You can still show your support by sending flowers directly to the family, or planting a memorial tree in memory of Shirley Cowles.
Visit the Tribute Store

Share Your Memory of
Shirley
Upload Your Memory View All Memories
Be the first to upload a memory!
Share A Memory
Send Flowers
Plant a Tree