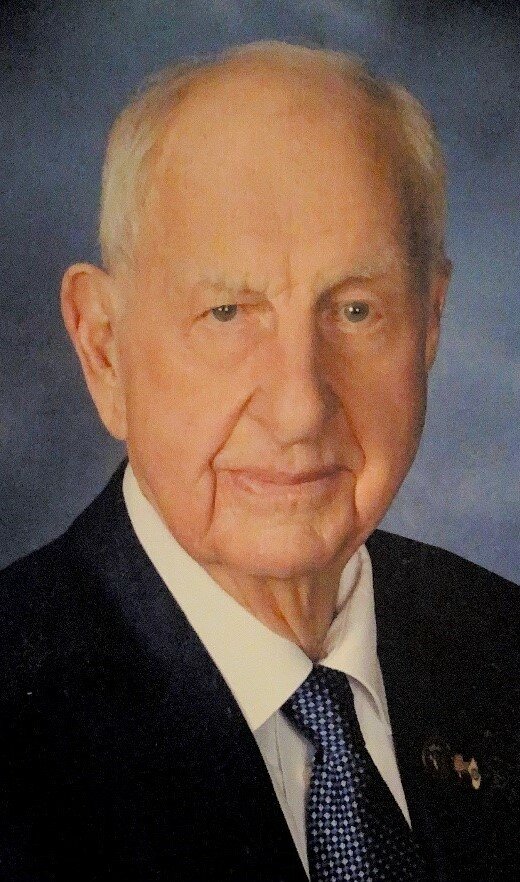 Loren J. “Andy” Andreo, 93, of Manchester, beloved husband of 62 years to his devoted wife Margaret M. “Peggy” Andreo, passed away Tuesday, November 23, 2021, at his home surrounded by his loving family.  Born in Manchester, he was the son of the late Domenick and Mary (Fracchia) Andreo and was a lifelong resident.  Andy was a graduate of Manchester High School, had served in the US Navy and following his service graduated from Bryant College. A lifelong love of football, he played with the Manchester Merchants for 3 years.

Shortly after graduating from Bryant, he opened his first entrepreneurial endeavor Maple Market in 1951, which later evolved into Andy’s Market setting him on the path of owning and operating several independent grocery stores over the span of more than five decades.  This provided the foundation for his entrepreneurial spirit, having invested in many other entities, including bowling lanes, liquor stores, professional sports teams and was one of the original investors in the Superman movie franchise.  He also built a real estate portfolio, including residential and commercial, starting in the mid-sixties through recent years, that has grown into a thriving family business, Andreo Family Enterprises.

A founding member and communicant of the Church of the Assumption, he was a great supporter and benefactor of both Assumption School and East Catholic High School, having received St. Joseph Medal of Appreciation from Archbishop Henry Mansell.  Andy has also held various positions as a member of the Connecticut Vocational Board of Education; director of Glastonbury Bank and Trust Company; treasurer for the Dewey Investment Company; director East Hartford Chamber of Commerce; member East Hartford Rotary; director Connecticut Food Stores Association, and Man of the Year 1984; and board member of the Holy Apostles Seminary in Cromwell, CT. He was the recipient of the Bryant University Distinguished Alumnus Award in 2020. He was also a member of UNICO, and director Hartford County Sheriff’s Office Foundation. He truly enjoyed spending his summers in Westerly, RI.

Andy is survived by his children and their spouses, Loren Andreo Jr. and his wife Janet of West Simsbury, Michael Andreo and his wife Victoria of Tolland, Mary Randazzo and her husband Paul of Glastonbury, Karen Marandino and her husband Dominic Jr. of South Windsor, John Andreo and his wife Karen of South Windsor, Ann Brazel and her husband David of Glastonbury; his 22 grandchildren Loren III and wife Katja, Melissa and husband Joseph, Meghan and husband Chris, Michelle and husband Bill, Dana and fiancé Michael O’Sullivan, Paul and wife Rebecca, Matthew and wife Katlyn, Michael and wife Tori, Margaret, Christina and husband Brendan, Andrea and husband AJ, Dominic III and wife Alyssa, Lauren, John Jr., Jennifer, Nicholas, Christie and husband Steve, Jacalyn, Katherine and husband Dominic, Peter, Patrick and Kara and her fiancé Kyle Almeida; and 19 great-grandchildren; special friends Thomas Moriarty and his family, Norman Yester, Kenny Rider and Thomas Brazel; and many loving nieces and nephews.  In addition to his loving wife, he was predeceased by his sister Gentila “Sandy” Pawloski.

A Mass of Christian Burial will be celebrated on Monday, November 29th at 11:00 a.m. at the Church of the Assumption, 27 Adams Street South, Manchester, followed by burial in St. James Cemetery.  Please meet directly at the church.  Family and friends may call at the John F. Tierney Funeral Home, 219 West Center St., Manchester on Sunday, November 28th from 2-7 p.m.  Memorial contributions may be made to either East Catholic High School, 115 New State Road, Manchester, CT 06042 or the St. Francis Foundation, 95 Woodland Street, Hartford, CT 06105 or Bryant University, 1150 Douglas Pike, Smithfield, RI 02917.

To send flowers to the family or plant a tree in memory of Loren Andreo, please visit Tribute Store
Sunday
28
November

Share Your Memory of
Loren
Upload Your Memory View All Memories
Be the first to upload a memory!
Share A Memory
Send Flowers
Plant a Tree