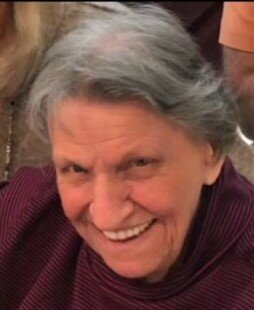 Anna R. Moriarty, 87, of Farmington, formerly of Manchester, the beloved wife of Thomas F. Moriarty, Jr. died Friday, December 3, 2021 at her home surrounded by her family.  Born in West Hazelton, PA she was the daughter of the late John and Anna (Gergley) Refowich and lived in Manchester for many years.  First and foremost Anna was a loving and dedicated wife, mother, and grandmother who always put her family first.  She began her life’s work at Shriner’s Hospital. When her life took root in Manchester she worked at the Meadows Nursing home.  She eventually retired from Manchester Manor as a nurse’s aide after many years of compassionate service.  Anna was a longtime dedicated communicant of the Church of the Assumption and was a member of their choir which was a source of her friendships and joy in her life.  She was also a longtime member of the Mothers Circle of St. Bridget Church and often spoke of the beautiful, strong, and loving women in her group.  Anna and Tom loved to spend time square dancing with their friends, playing bridge and bocci, and taking their family on memorable camping trips throughout the east coast.  During Anna and Tom’s retirement years they spent the winters in Florida where they opened their home to family and friends who wanted to get away from the cold weather.  In their later years they moved to Farmington.

In addition to her loving husband, she is survived by her children Anna Grappone and her husband Ronald, Maureen Moriarty-Palmieri and her husband Michael, Tom Moriarty and his wife Evelyn Marren, and Philip Moriarty and his wife Sharon; her grandchildren Monica, Michael, Zachary, Thomas, Mirtnesh, Noah and Sawyer; and numerous nieces and nephews.  She was predeceased by her beloved brothers Michael and Steve Refowich, her sister Mary Loop, and her beagle, Mandy.

A Mass of Christian Burial will be celebrated on Thursday, December 9th at 11 am at the Church of the Assumption 29 Adams St. South, Manchester followed by a private burial in Buckland Cemetery.  Family and friends may call at the John F. Tierney Funeral Home 219 West Center St. Manchester on Wednesday from 4-7 pm.  For online condolences please visit www.tierneyfuneralhome.com.

To send flowers to the family or plant a tree in memory of Anna Moriarty, please visit Tribute Store
Wednesday
8
December

Share Your Memory of
Anna
Upload Your Memory View All Memories
Be the first to upload a memory!
Share A Memory
Send Flowers
Plant a Tree