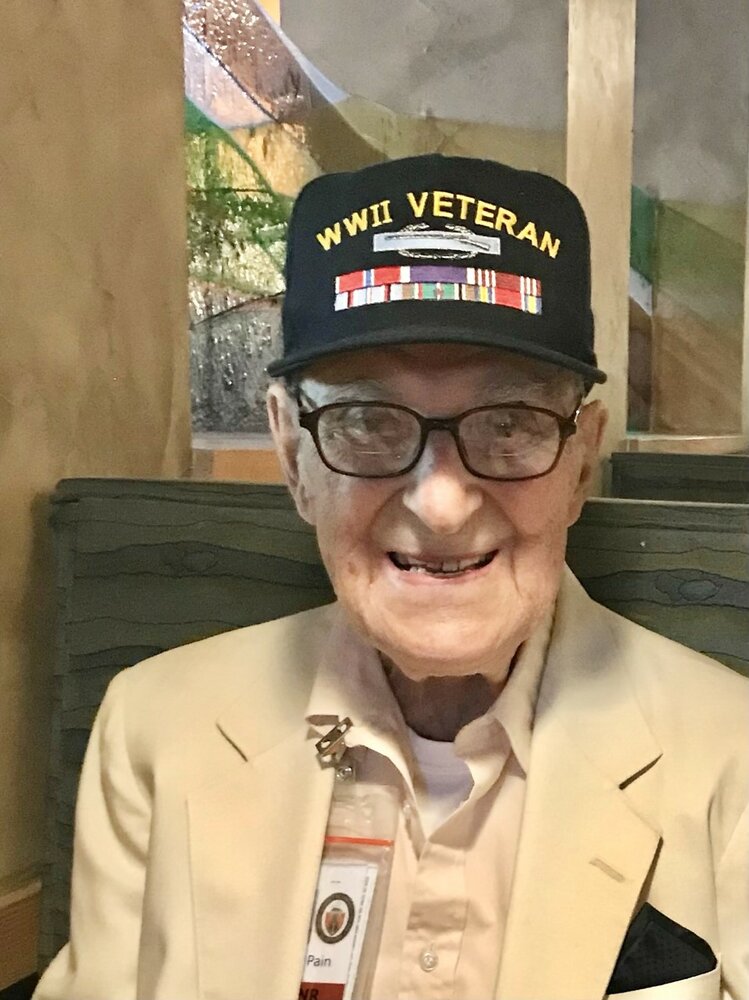 Ernest J. “Ernie” Pain peacefully passed into the loving arms of Morpheus on Sunday, December 5th at Gulfport Memorial Hospital surrounded by his loving daughters.  Ernie had celebrated his 100th birthday with family and friends on August 31, 2021.  He was born in Fall River, MA in 1921 to Sylvio and Ernestine Pain.

Ernie (also known as Pepere to all of his family and their friends) was predeceased by the love of his life, his wife Lillian, his sister Arlene Albernaz, and his son-in law Mark Troy.  He is survived by his much loved daughters and son, Lauren Troy, Karen Gliha and her husband Fred, Sharon Pain, Dan Lopez and his partner Danielle Esposito.  Pepere adored his grandchildren Dan Troy, Marie & Nate Tripler, Ryan & Danielle Gliha, Jaime & Patrick Sullivan, Nissa & Christopher Fiano and Eliana Lopez.   Pepere also had 12 great-grandchildren who kept him hopping - Lillian Troy, Gavin and Keegan Tripler, Alivia, Addison, Everly and Lyla Gliha, Peyton and Brady Sullivan, and Scarlett, Violet and Vienna Fiano.  Finally, Ernie leaves behind his beloved cousin Pauline Davis (his whirling dervish) and her family, Roberta, Curtis and John Curtis Quesnell.

Ernie was a proud, decorated World War II Army veteran who was wounded at the battle of Brest, France, after which he spent over a year in the hospital.  He was the recipient of the Bronze Star, Purple Heart and Good Conduct Medals. After discharge, he went to school under the GI Bill to learn machining, after which he spent many years working for Hamilton Standard making space suits for the Gemini and Apollo space missions.  He then switched careers and worked for the State of Connecticut Board of Regents for the Community College system until he retired.  Ernie was a life-long member of the Army-Navy Club in Manchester, CT where he spent over 25 years as the recording secretary, churning out the monthly newsletter.  He was also a life member of the Veterans of Foreign Wars and the American Legion.

Ernie retired in his 70s to St. Petersburg, Fl, where he volunteered for over 24,000 hours at the Bay Pines Veteran’s Hospital, and in his spare time, learned to sail a masted sailboat along the coast of Tampa Bay.

When he was in his late 80s, he was lucky enough to be accepted as a resident of the newly built Armed Forces Retirement Home in Gulfport, MS where he happily lived out the rest of his days with numerous field trips to New Orleans, Biloxi and other locations.  Ernie started the Friday night dances at the AFRH as he was a lifelong ballroom dancer, and he wanted to share his love of music and dancing with the other veterans.  Ernie was always the first in line to volunteer wherever and whenever needed.  He was honored to be a recipient of an Honor’s Flight to Washington, DC to see the WWII Memorial.  He often commented on how touched he was to receive the outpouring of love and thanks he received at the airports, onboard the plane and during the procession to the Monument, as they were just doing what needed to be done as soldiers.  In 2014, at the age of 93, he was chosen as one of 8 Greatest Generation Ambassadors from AFRH Gulfport to travel to Japan for a 6 day friendship tour including tours of Tokyo and Hiroshima and playing in a Friendship Softball game with Japanese veterans.

Pepere’s greatest joy was spending time with his family in Connecticut and Utah.  He flew extensively until he was 98 to attend weddings, birthdays, graduations, and family vacations.  If there was music, he was the first one on the dance floor in his white dinner jacket, wearing his special dancing shoes so he would glide across the floor.   He delighted in teaching his great-grandchildren how dancing was properly done.  He was always a gentleman, and manners were meant to be used at all times!

Ernie’s family would like to say a very special thank you to the staff of the AFRH, especially the nurses of Valor Hall and Liberty Hall, and especially to Linda Smith and Susan Bergmann for their unending devotion to Ernie.  We hope you know how much he appreciated your love and kindness, and how much it meant to us to know he was well cared for!

Ernie’s family will receive family and friends at the John F. Tierney Funeral Home, 219 W. Center St., Manchester, on May 28th, 2022, from 9-10:30 a.m. with a funeral home service immediately following. Burial with military honors will be held at East Cemetery, where he will be buried with his beloved Lil.

To send flowers to the family or plant a tree in memory of Ernest Pain, please visit Tribute Store
Saturday
28
May

Share Your Memory of
Ernest
Upload Your Memory View All Memories
Be the first to upload a memory!
Share A Memory
Send Flowers
Plant a Tree