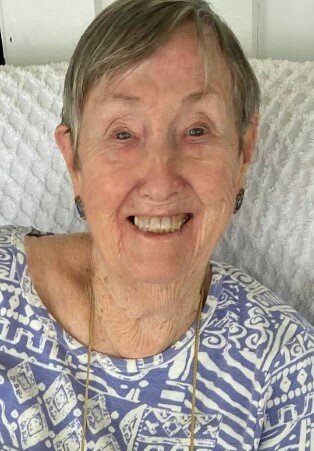 Please share a memory of Jamie to include in a keepsake book for family and friends.
View Tribute Book

Born and raised in Hartford, Jamie was the only child of Joseph and Marion (Mikolajczyk) Wiancek. In her youth, she designed and made her own clothes, spent incalculable hours in dance class, enjoyed reading, and was an all-around autodidact. (“Look it up.” -Jamie Fritsch)

Jamie managed to combine all her interests into a career as a professional dancer (with lifelong friend Alyce Carella and Frank Hatchett) then as a costume designer, and ultimately she opened her own dance recital/costume manufacturing businesses, Jamie Originals and The Costume Shop, in Manchester in 1976.

Jamie wore many hats and had many interests, but the one that her family and friends benefited from the most was her self-taught ability to cook anything and cook it well. “If you can read, you can cook,” is wisdom she imparted to her children while she passed on her knowledge and recipes.

Upon retirement, Jamie shuttered her business, the couple sold their home, and the two of them lived all over the world on a trawler yacht, Kwakatu.  While this was, mostly, her husband’s dream, Jamie adored travel and learned or experienced something new at every port.

Jamie is preceded in death by her parents and her husband of 52 years, Dave.  She spent her final years based in Vernon, Connecticut but still managed vacations with her family where she read a lot of books in beautiful places.

It is with a heavy heart full of beautiful memories that we say goodbye to an intelligent and creative woman who knew how to make unconventional choices, conventional.

There will be no funeral service, but, per Jamie’s wishes, a celebration and toast to her life will be planned for later this year if circumstances allow.  If you are so led, memorial donations can be made to the American Diabetes Association or the ADA New England Chapter at P.O. Box 7023, Merrifield Virginia 22116-7023, or The Connecticut Arts Alliance at ctartsalliance.org.

To send flowers to the family or plant a tree in memory of Jamie Fritsch, please visit Tribute Store

A Memorial Tree was planted for Jamie
We are deeply sorry for your loss ~ the staff at John F Tierney Funeral Home
Join in honoring their life - plant a memorial tree
Services for Jamie Fritsch
There are no events scheduled. You can still show your support by sending flowers directly to the family, or planting a memorial tree in memory of Jamie Fritsch.
Visit the Tribute Store

Share Your Memory of
Jamie
Upload Your Memory View All Memories
Be the first to upload a memory!
Share A Memory
Send Flowers
Plant a Tree