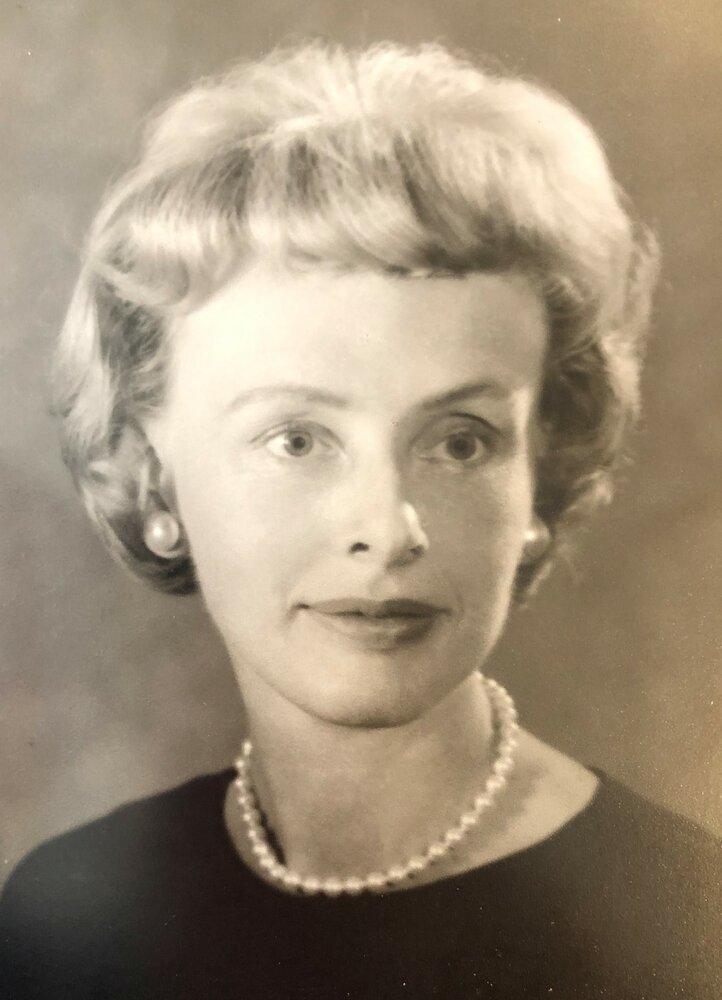 Our adored mother, aunt, and mimi Jonice Schmidt FitzGerald departed this world on February 11, 2022, taking with her the aura of love that she spread to everyone she knew. Born in Danbury, Connecticut, on April 15, 1926, the first child of Henry and Ella Dobos Schmidt, she brought them joy and pride as she grew from the doting big sister of her beloved younger sister Barbara and brother Ronald into an accomplished college student at the Danbury State Teachers College, now Western Connecticut State University. She was the first person in her family to graduate from college, and she did so with style and determination, serving as class treasurer and class president twice. Right before her graduation, a soldier recently returned from war stole her heart, and she married William Ennis FitzGerald on April 24, 1948. Like many married couples during the late 1940s and ‘50s, they struggled to make ends meet early in their marriage. Jonice taught third grade in Manchester to put Bill through college and law school– and in the tradition of the Greatest Generation they prevailed and succeeded. Jonice loved her career as a teacher and kept pictures of all of her classes in albums she often revisited. Hers and Bill’s greatest joy, however, came with the birth of their first daughter, Debra Ann, and then two years later, Megan Marie, who both loved her to the moon and back. Jonice lived for her husband and daughters and devoted every ounce of her being to giving them joyful, love-filled lives. As her daughters grew and needed less attention, Jonice turned some of her time to volunteer work, giving countless hours to the League of Women Voters, the Manchester Hospital Auxiliary, and serving on the Board of Directors for the Visiting Nurses. She gladly traded those duties to become the much-loved mimi when her adored grandchildren were born. She cared for each of them–Emmet FitzGerald Gemme, Kristen Gemme Brandenburg, and William and Martin FitzGerald Edgington–in a home filled with toys, ridiculously sweet cream of wheat, and never ending ice cream. They gave her joy beyond words. And in her last years, her delightful great grandson Leo made her smile at a much-needed time.

Jonice and Bill lived full and meaningful lives until Bill’s death in 2014. Always surrounded by wonderful family and friends, they spent every summer at the family home on Lake Candlewood and had countless memorable ski trips with the extended family during which Jonice would gleefully drop all skiers at the mountain then race to the village stores so she could shop without interference.  They spent their last twenty years in the warm company of new friends at the Arbors in Manchester.  Throughout every aspect of their lives, they treasured the company of Jonice’s cherished childhood friend turned sister-in-law Shirley Beers FitzGerald and Bill’s brother John Rohde FitzGerald. They were never far from each other, and laughed and supported each other until their final days. Besides her two daughters, grandchildren, and great grandson, she leaves her dear son-in-law Todd Edgington, and much-loved nieces and nephews: Betsy and Rich Didan, John and Debbie FitzGerald, Ann and George McFee, and their wonderful children, all of whom brought her and Bill much joy throughout their lives, along with special cousins-in-law Vivien Keane, Marta Keane, Jondi Keane, Marni and Marty Connelly, and nephews Michael and Greg Schmidt.  With a heart so large it took in everyone in our family and held them close, Jonice leaves us with an unfillable hole in ours.

The family will celebrate Jonice’s life at a later date.

To send flowers to the family or plant a tree in memory of Jonice FitzGerald, please visit Tribute Store

A Memorial Tree was planted for Jonice
We are deeply sorry for your loss ~ the staff at John F Tierney Funeral Home
Join in honoring their life - plant a memorial tree
Services for Jonice FitzGerald
There are no events scheduled. You can still show your support by sending flowers directly to the family, or planting a memorial tree in memory of Jonice FitzGerald.
Visit the Tribute Store

Share Your Memory of
Jonice
Upload Your Memory View All Memories
Be the first to upload a memory!
Share A Memory
Send Flowers
Plant a Tree