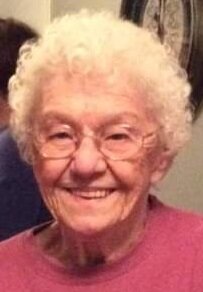 Please share a memory of Bernadette to include in a keepsake book for family and friends.
View Tribute Book

On Saturday, February 26, 2022, we lost a great woman who we held close to our hearts, Bernadette (Bolduc) Bourque. Bernadette was just two weeks shy of her 98th birthday, she was born on March 12, 1924, in Saint Como Beauce Quebec Canada. She was the daughter of Wilfred Bolduc and Clara (Roberge) Bolduc and later became a mother of six children that she had to fight for at one time or another, always believing in them, and supporting them as they worked towards each of their own successes. She took great pride and admiration for all that her children and grandchildren have gone on to accomplish, each success a testament to the wonderful woman she was. An accomplished cook and homemaker, each member of her family was so fortunate to get to sit at her table and enjoy one of her great home cook meals! Cooking and baking were the ways she was able to truly express her love to her family. She will be missed greatly by her daughter Helene, who cared for Bernadette for many years and was by her side when she crossed over and was able to be rejoined with her beloved husband Real. Bernadette is survived by her children Helene Crispino and her husband Alec, Ray Bourque and his wife Vicki of Virginia, Pierre Bourque and his wife Renate of Oregon, Christiane Oszurek and her husband Richard of Texas, Andre Bourque and his wife Joan of Tennessee, and daughter-in-law Laura Bourque; and all of her loving grandchildren, great grandchildren, and all her nieces and nephews of Quebec, Canada. She was predeceased by her husband Real Bourque and son John Bourque.
A Mass of Christian Burial will held on Saturday, May 14, 2022, at 10:00 a.m. at St. Bridget Church, 80 Main Street, Manchester, CT, burial to follow at St. Bridget Cemetery.

To send flowers to the family or plant a tree in memory of Bernadette Bourque, please visit Tribute Store
Saturday
14
May

Share Your Memory of
Bernadette
Upload Your Memory View All Memories
Be the first to upload a memory!
Share A Memory
Send Flowers
Plant a Tree