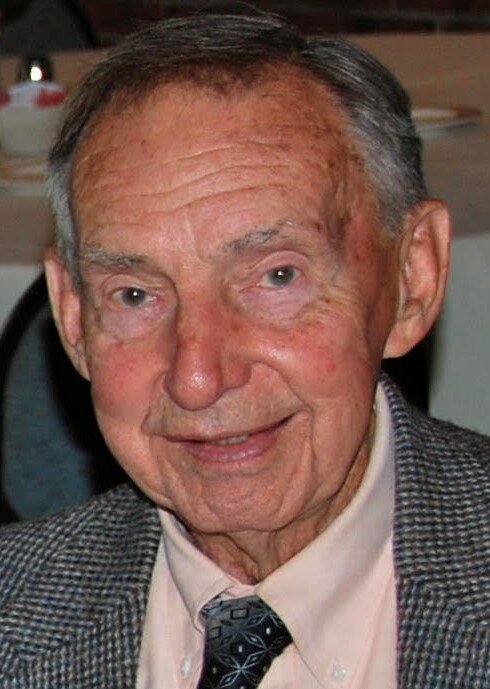 Please share a memory of Kenneth to include in a keepsake book for family and friends.
View Tribute Book

Kenneth William Chadwick, 101, our beloved Dad and humble constituent of “The Greatest Generation”, landed on his final shore on Sunday, March 27, 2022, as he wished, in the comfort of his own home.  Born at home on Hackmatack Street in Manchester, CT on October 4th, 1920, to William H. and Mary A. Chadwick, he was a 1938 graduate of Manchester High School and lived most of his life in town.  His life was shaped by the work of his hands and his mechanical abilities, first at Pratt & Whitney Aircraft in his early years, where he was deferred from military service for a time due to his work in the defense industry.  He trained many on his line, but the final few before his deployment were some of the original “Rosie the Riveters”.  Ken was a proud World War II veteran, U.S. Army Corps of Engineers, deployed to the Asiatic Pacific Theater, serving in an Australian shipyard, landing infantry on islands in the South Pacific on LST boats (New Guinea, Luzon), earning a Philippine Liberation Medal, and finally, preceding his honorable discharge, serving in Tokyo, Japan after VJ Day.  Serendipitously, he was called up to troubleshoot repairs to General MacArthur’s boat when the General’s dedicated crew needed a “master mechanic”.

After the war, Ken began building for his future; his day job at Don Willis Garage, saving paycheck to paycheck, and subsequently building his own garage cinder block by cinder block.  Thus, Ken’s Garage in Andover, CT was born, truly a labor of love, with the love of his life, Julie by his side.  Rumor has it, she even felled a few trees!  Miss Quinn, R.N., first caught his eye at Manchester Memorial Hospital and the rest, as they say, is history.  They married in 1949, after a courtship interrupted by wartime, and were most proud of their two children, Ken Jr and Rosemary.  Ken Sr was a long-standing member of the Andover Volunteer Fire Department, and member and past president of The Independent Garage Owners Association.  Importantly, Ken’s Garage became a “full employment act” for more than one generation of Chadwicks! In his retirement, Kenneth pledged the fraternal Scottish Rite of Masons and was a member in good standing of the Manchester Lodge at the time of his passing.

Ken’s family would also like to extend a special thank you to caregivers Vivienne A and Elizabeth A who helped make home possible.

To send flowers to the family or plant a tree in memory of Kenneth Chadwick, please visit Tribute Store
Saturday
9
April

Share Your Memory of
Kenneth
Upload Your Memory View All Memories
Be the first to upload a memory!
Share A Memory
Send Flowers
Plant a Tree