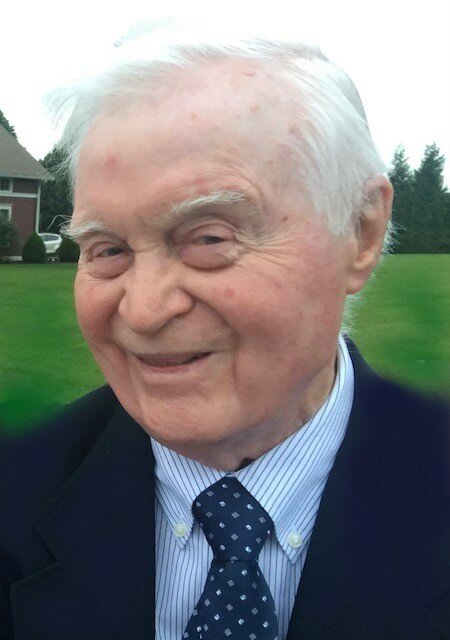 Glenn R. Law, 95, of Glastonbury, formerly of Manchester, the beloved husband of 67 years to Elaine (Schwing) Law, died Thursday, June 23, 2022, at Manchester Memorial Hospital. Born in New Haven, CT, he was the son of the late Jonathan and Evelyn (Anthony) Law. He was also predeceased by his son Bruce R. Law.

Glenn was a 1944 graduate of Manchester High School; upon graduation he immediately enlisted in the US Navy and proudly served his country during World War II, from 1944-1946. While in the Navy, he served as a Teletype Operator in Saipan. Upon returning, he spent time with relatives in CA and began working for a division of Pratt & Whitney Aircraft there. Later he transferred to the East Hartford, CT location where he worked as a Quality Control Compliance Investigator until retirement in 1987, after 40 years of employment. He was a member of North United Methodist Church for 80 years, a long-time member of the Northern Nut Growers Association with his father, and along with Elaine, was also a long-time member and treasurer for the Manchester Land Conservation Trust. He had a small orchard of apple trees that he nurtured at their home on Baldwin Rd. They would sell the apples on a stand on the property and also to Highland Park Market, always making sure that they were just the right size and polished well. Glenn also loved driving, traveling, dining out and spending time with his family. They purchased a timeshare at the Trapp Family Lodge, Stowe, VT in 1987 where the family spent many years together enjoying the beauty and charm of the area. Many other trips were taken by car or train with the family, across the US and Canada over the years. Later, he and Elaine would travel to Europe and South America by plane and took many cruises including a trip to Germany on the Queen Mary II. He was a loving man who had a quiet wit.

Calling Hours will be held at the John F. Tierney Funeral Home on Wednesday, July 6th from 5-8 pm. The funeral service will be held at North United Methodist Church in Manchester, CT on Thursday, July 7th at 10:30 am. Services will be available via Zoom at www.NUMC.axelhouse.com. Burial will be private.

To send flowers to the family or plant a tree in memory of Glenn Law, please visit Tribute Store
Wednesday
6
July

Share Your Memory of
Glenn
Upload Your Memory View All Memories
Be the first to upload a memory!
Share A Memory
Send Flowers
Plant a Tree