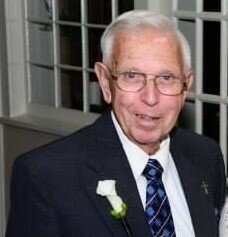 Jack was born in Hartford, CT on March 3, 1937, son of the late Walter A. Anderson and Marion (Barron) Anderson. Later in life he thoroughly enjoyed the company of his stepmother Imelda (Smith) Anderson.

He grew up in Manchester, CT and was a graduate of Manchester High school. Jack then went on to UCONN to study music then changed directions and transferred to Bryant College in Providence, Rhode Island where he graduated with a degree in Business Administration.

Jack went to work for the Travelers Insurance Company where he enjoyed a successful career in the tax administration department for more than 30 years.

The Travelers was also where Jack met the love of his life, his wife of more than 61 years, Nancy.  Nancy also worked at Travelers in the legal department where they happened to meet each other in the company elevator.

After living for short time in Vernon, CT, Jack became a resident of East Hartford for well over 50 years. A devout Catholic, he was a former longtime faithful communicant, Musical Director and cantor at St. Isaac Jogues R.C. Church in East Hartford and in later years transferred to St. Bartholomew Church in Manchester, CT.

In addition to his musical participation at St. Isaac Jogues, Jack’s love of singing and entertainment extended to numerous other areas starting with the former Stanley Green’s Night Club in Manchester in the 1960’s.

Jack was also called upon to sing at numerous weddings and funerals over many years for parishes, friends, and other acquaintances. He was the “go to guy” known for his professionalism and his angelic voice while singing hymns.  Jack also produced, directed and starred in many variety shows at St. Isaac’s as well as other parishes, local member clubs such as The Lions Club and schools. After rallying the troops for the performances, the shows took weeks and months of preparation and were always a hit!  As a member of the Travelers Choral Club he helped direct large-scale public Christmas concerts at the Bushnell Performing Arts Center.  He also served as the MC at the annual Festival of Lights on Constitution Plaza turning the “Magic Key” for the illumination of the brilliant Christmas light display.

In his retirement years, Jack and Nancy moved to Clearwater, Florida where they were snowbirds for 30 plus years. It then began an annual tradition of many family members and friends packing up to visit them in the Sunshine State.

Jack and Nancy enjoyed sunny days at the beach together as well as many visits with family to the FL theme parks and other attractions. They also traveled extensively, especially loved going on cruises and enjoyed their times in Newport, Rhode Island! Jack and Nancy immensely enjoyed rooting for the UCONN Basketball team in retirement, often in attendance at the games when the UCONN women were in town vs the USF women’s team.

Jack’s greatest joy was being with his family. He enjoyed being with his kids, grandchildren, and great grandchildren; it was what he cherished. He would always recognize every family member and was truly interested in their lives and interests. He would often use the phrase, “this is so wonderful”!

Jack was known for being kind, generous, thoughtful, and always had kind words and a positive outlook. He would talk to everyone and through his genuine care of others garnered many different circles of friends. Nancy often said, “everyone loved Jack, but I got him!”

In lieu of flowers, the family suggests donations be made to a cause close to Jack’s heart - St. Jude’s Children’s Hospital. For online condolences, please visit www.tierneyfuneralhome.com.

To send flowers to the family or plant a tree in memory of John Anderson, please visit Tribute Store
Thursday
28
July