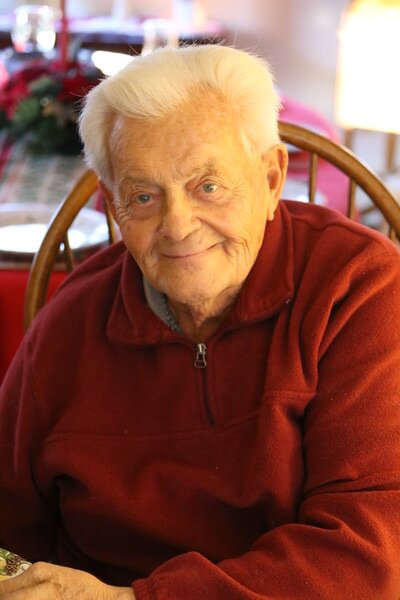 With sadness, we announce the peaceful passing on July 31, 2022, of our beloved and remarkable father, William (Bill) Buckson, age 98. He led a long, fulfilling and love filled life.

After living in Brooklyn during his early childhood, William’s family bought and relocated to a small dairy farm in Mill River, Massachusetts during the great depression in hopes that by working the land, the family would have enough food to eat—something that was not guaranteed in the city at the time.  On their farm in Mill River (which lacked the modern conveniences of electricity, inside plumbing, or central heat that were available but which they could not afford) Bill and his family worked extremely hard—milking a herd of 20 Holsteins by hand twice a day, raising other farm animals, cutting and storing ice in saw dust for year-round refrigeration, cutting firewood for heat and cooking, tilling the fields and harvesting corn, wheat, and vegetables via horse drawn plows and wagons. He and his father poured a concrete floor by hand in the cow barn (not an easy task) and painted everything white to comply with the Milk Act.  They listened to the radio via electricity from a car battery and read at night via kerosene lighting.

While on the farm, Bill developed a love of reading and read extensively becoming self-taught in many areas leading to his many skills, knowledge, and later life hobbies including such things as farming, animals, carpentry, building (he designed and hand-built a huge addition and large three bay garage to his home in Bolton as well and completed all the finish inside trim work on his son Daniel’s house in Bolton), mechanics (he could fix and repair his own vehicles and anything with an engine in it and loved restoring antique cars), hunting, fishing, bladesmithing, and candy making, to name a few.  He taught himself to play the harmonica, and could play many songs by ear, although he could not read music. Although his formative years were filled with hard physical work and few of life’s luxuries, he learned the importance of perseverance and a strong work ethic, which served him well and were qualities he later instilled in his children.

Bill graduated from New Marlborough Central School (12 grades in the same building) in Mill River, Massachusetts (graduating class of 5 students) and later continued his education at MacArthur Aircraft Engine School on Long Island through the GI bill after briefly serving in the U.S.  Army during WWII. He credits his mechanical training at MacArthur with him being hired by Pratt and Whitney Aircraft in East Hartford, CT as an entry level mechanic where he was a dedicated employee for 38 years, finishing his career as a group Foreman in PWA’s Experimental Assembly and Design Department.  He and his wife both worked at Pratt for many years, commuting together on the midnight shift.  Bill’s job at Pratt was to oversee the testing of newly designed jet engines, placing them under extreme conditions in an attempt make the engine fail.   His team would then tear the engine apart, work with the engineers to redesign the failed part, then reassemble the engine and again test the newly designed and assembled engine to see if the “redesign” would withstand his team’s next round of extreme testing.   His life’s work and career at PWA helped make air travel safer for all who flew.  Whenever he flew, he would always check the engines on the plane for the PWA logo and, if seen, he rested easy and reassured others that all would go well as he knew how thoroughly the engines were tested and that they would perform as designed.

Bill met and fell in love with Stefania (Zinkiewicz) Buckson, married in 1951, and remained married for 58 wonderful years until Stefania’s passing in 2009.  They were inseparable, and their love was blessed with three children who they raised selflessly with incredible devotion, love, support, and pride.  He and his wife made sure their children were never wanting for anything and supported them in all ways without question.

All three of his children were able to attend college (something never afforded to Bill or his wife) and all graduated from college with a bachelor’s degrees without any student loan debt, a wonderful financial gift to them to help them start their lives. He lived and raised his family in Bolton and was a long-time resident of Bolton for 66 years. Bill was also blessed with 5 grandchildren and 6 great grandchildren.

While his health allowed, Bill was an active communicant at St. Maurice Roman Catholic church in Bolton, converting from Russian Orthodoxy under the tutelage of Father Cronin.  He volunteered for the fund-raising committee at St. Maurice and to help secure pledges from parishioners to build the current Parish Center.

Bill was a remarkable and wonderful person, husband, father, and friend.  If knew if he could read about it, he could do it. He knew if he set his mind to it and worked hard enough, he could get it done.  His endearing and genuine laugh and smile, wise guidance, wisdom and support, were his trademark.

He loved greatly, was greatly loved, and will be greatly missed.  May God bless your soul Dad, and may you now rest in peace.

In addition to his parents, Bill was predeceased by his loving wife, Stefania (Zinkiewicz) Buckson; his loving daughter, Kathleen Ann (Buckson) Clemens, and his loving siblings Maxim Buckson (and his wife Jane), Elsie (Buckson) Osypuk (and her husband, Paul) and his loving sister-in-law Zosh (Buksa) Buckson.

Special thanks to the wonderful, caring staff at the Hearth of Glastonbury and Evergreen Health Care Center in Stafford Springs, CT including their Hospice program who cared for and made Bill comfortable in his later years.

Special thanks to his dear niece, Rosemary Lombard, who always found the time to visit him.

A wake for Bill will be held at Tierney’s Funeral Home, 219 West Center Street, Manchester, CT 06040, on Thursday, August 4th, 2022, 6:00—8:00 p.m. where individual inside viewing has been arranged but gathering and visiting with family will be outside.

In lieu of flowers, donations may be made in Bill’s name to the Bolton Scholarship Fund, 72 Brandy Street, Bolton, CT 06043. For online condolences, please visit www.tierneyfuneralhome.com.

To send flowers to the family or plant a tree in memory of William Buckson, please visit Tribute Store
Thursday
4
August

Share Your Memory of
William
Upload Your Memory View All Memories
Be the first to upload a memory!
Share A Memory
Send Flowers
Plant a Tree