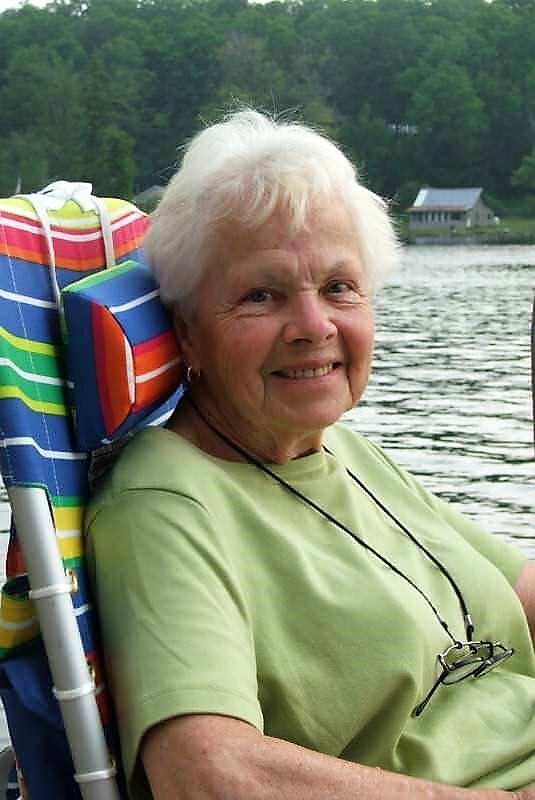 Joan (Viggue) Stewart, formerly Joan Larson, died peacefully on December 9, 2022. She was 90 years old. Joan was born in Londonderry, Vermont, on January 24, 1932, to Clifton C. and Hazel (Brewer) Viggue. She was the fifth of eight children. She graduated from Chester (VT) High School.

Though raised through the Great Depression, Joan's childhood included many happy memories. She spoke of how her father's hunting prowess kept food on the table and the fierce baking rivalry between her mother and her beloved Aunt Dot (a rivalry from which many of us benefited over the decades). She smiled at memories of skating on the frozen river that her father shoveled clear of snow for the neighborhood children, year after year. Any overnight guest in Joan's home came downstairs to the beautiful sound of Joan's soft singing. Those pretty notes will stay with us forever.

Joan was fortunate to marry the love of her life, BJ Stewart. Together, they made each other complete. Joan and BJ risked everything they had to start two businesses in Cuttingsville, Vermont. First, they built a successful Ford tractor business, only to see it washed away in the flood of 1973. They refused to give up and tried again, creating the Olde Barn general and hardware store which became a fixture in the town. In its early years, Joan ran the Olde Barn with her friend Phyllis Tobin. But what people will remember is Joan and BJ working side by side and their passion for the town of Cuttingsville. There was always a pot of coffee waiting for visitors, donuts on Sundays and a fire burning in the wood stove. It was never an easy or prosperous life, but they loved it. Both Joan and BJ cared for their village friends and customers. At Easter time, they would decorate and hide candy-filled eggs on the Olde Barn lawns for all children to find, with prizes to be given to all. Joan and BJ also enjoyed sharing their love of their land called ‘Upperfields’ on Shunpike Road where they threw an annual kite-flying barbeque party for one and all. Joan was proud to serve as Trustee/Superintendent of Laurel Glen Cemetery Association.

A private burial will be held at the Laurel Glen Cemetery. Memorial contributions may be made to The Masonic Charity Foundation of CT, PO Box 70, Wallingford, CT 06492-7001.

To send flowers to the family or plant a tree in memory of Joan Stewart, please visit Tribute Store

A Memorial Tree was planted for Joan
We are deeply sorry for your loss ~ the staff at John F Tierney Funeral Home
Join in honoring their life - plant a memorial tree
Services for Joan Stewart
There are no events scheduled. You can still show your support by sending flowers directly to the family, or planting a memorial tree in memory of Joan Stewart.
Visit the Tribute Store

Share Your Memory of
Joan
Upload Your Memory View All Memories
Be the first to upload a memory!
Share A Memory
Send Flowers
Plant a Tree