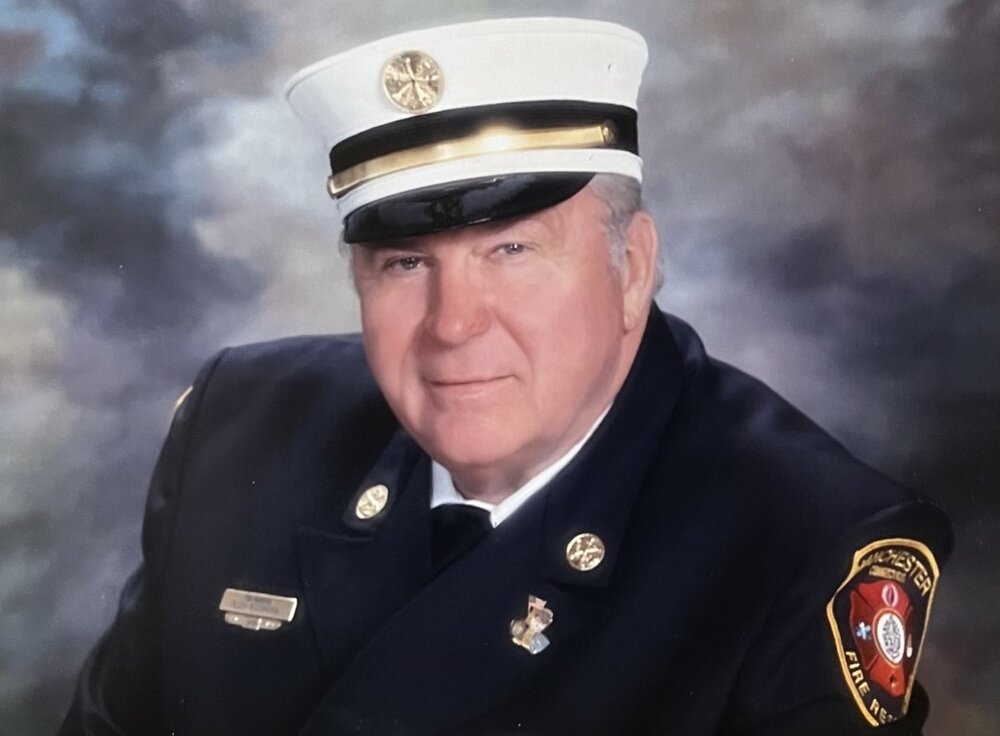 Rudolph C. “Rudy” Kissmann, Jr., 80, of Manchester, beloved husband of Gloria-Jean (Leone) Kissmann passed away peacefully at his home on Wednesday, December 21, 2022.  Born in Manchester, he was the son of the late Dorothy (Booth) and Rudolph C. Kissmann, Sr. of Manchester.  He was a US Navy veteran stationed on both coasts Norfolk, VA and San Diego, CA.  Then going on to work at Pratt & Whitney.

He was a proud, lifelong Manchester resident and was a very active member of this community. You would often find him attending various town events, volunteering his time and doing what he loved. He dedicated his career to the Town of Manchester Fire Department, starting as a Firefighter in 1965, later becoming certified in the first class of EMT’s and then Paramedics on the the department.  While being promoted through the ranks, and eventually appointed to the role of Deputy Fire Marshal, it was a calling and honor to serve his community.  One of his favorite annual events was the youth fire prevention program, that travels to elementary schools, something he deeply enjoyed.  A member of the International Association Arson Investigators, he was awarded the 2001 IAAI Investigator of the Year away and was inducted as a lifetime member. In 1997, he was appointed Fire Marshal for the Town of Manchester and later retired in 2006 as Deputy Fire Chief/Fire Marshal.  Rudy’s career was devoted to the Town, but his service only began there, having served on the Town of Manchester Board of Directors from 2008-2017, a member of the Manchester Historical Society, Cruisin' on Main, Rebuilding Together,  The Wall that Heals, among many other community focused activities too numerous to mention. As his condition progressed it was the people he met, the connections he made, and the effort of many hands make light work that he missed the most. Rudy loved finding a breakfast stool, locally where he could be found chatting with new and old friends in the local coffee shops…

In addition to his beautiful and loving wife Gloria, Rudy is survived by his daughter Jodi Kissmann-Huyler, as a family they loved planning vacations and ways to spend time together. Being a kind and dependable husband and father was very importance to Rudy and he never disappointed when it came to the love he showed and had for his family. He also leaves behind his grandsons, Dalton Huyler, Cole Huyler and son-in-law Joe Huyler. His loyal companion, dog, Chief will miss him terribly as he was a blessing over the last several years. Just like he dealt with all experiences in life, Rudy managed his illness with strength and grace, and wanted to spend as much time with his family as possible. On his final day, he was surrounded by his family, who he adored more than anything else in the world and who will continue to honor and celebrate his life in the way that they live. Thank You.

Memorial service will be held on Tuesday, December 27th at 10:00 a.m. at South United Methodist Church 1226 Main Street Manchester, CT followed by burial with military honors at East Cemetery, Manchester.  Family and friends may call at the funeral home on Monday, December 26th from 4-8 p.m.

In lieu of flowers please consider a donation to The American Heart Association https://ahatribute.funraise.org/fundraiser/jodilynn-huyler Thank you!

To send flowers to the family or plant a tree in memory of Rudolph Kissmann, Jr., please visit Tribute Store
Monday
26
December

Share Your Memory of
Rudolph
Upload Your Memory View All Memories
Be the first to upload a memory!
Share A Memory
Send Flowers
Plant a Tree